View source
watch 02:58
No Man's Sky Update - The Loop
Do you like this video?
Play Sound

Koku (Alternative) is a 4-star ground and AoE (Cone) type unit based on the character Son Goku (GT) from the anime Dragon Ball GT when he fought with Baby Vegu II on the Tuffle Planet. He can only be obtained from the Hero Summon and the Beginner Daily Rewards. GT Goku also has a special ability called Super Transformation, which transforms him into the Super Saiyan 3 form and allows him to attack even faster and deals more damage. His special orb, however, transforms him into a Golden Ozaru which is an entirely different unit with a completely different use. Said unit's stats are shown in the Orb toggle for stats.

He turns into a Golden Ape with his orb. From a 4 star with an orb, he directly becomes a 6 star.

Upon toggling the ability, Koku (Alternative) damage will increase by 75% and his SPA will shorten to 3.5, similar to Worl (Infinite Power)'s rewind skill. Unlike Rewind, however, the cooldown is very brief and an attack buff is provided. He also gets a visual transformation in the form of Super Saiyan 3. This transformation will last around 12 seconds, about 3-4 attacks.

When the Moon Orb's equipped, the name changes to Golden Ape and Koku (Alternative) transforms into a Golden Ozaru, having higher damaging stats.

Troops sell for half their cost of deployment plus upgrades. Koku (Alternative) can be sold. However, the Golden Ape can NOT be sold. 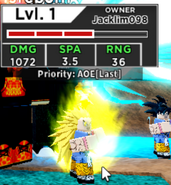