Were you looking for Machine-Knight?

Meta-Knight is a 5-star ground and AoE (Full) type unit based on Suzaku Kururugi from Code Geass that can only be obtained from the Hero Summon and is not a part of any evolution. Only one Suzaku can be placed per player and he cannot be sold. He also has an ability that spawns a rideable mech when pressed. The player has to ride the mech by holding down the E key on PC, holding down on the card that appears above the mech on mobile, or the Y button on an Xbox controller. When inside the mech, the player can hit both air and ground units, as well as place, upgrade, or sell other units. While in the mech, the player is unable to go into first person without being blocked by the mech's parts. You have to be in Mech Form to attack.

Suzaku can not be sold, so he should be placed carefully, away from other units, but still close to Erwin. 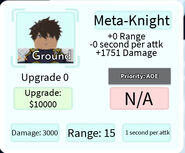 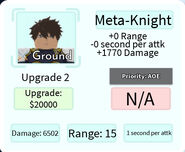 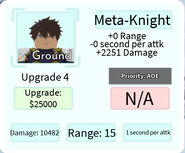 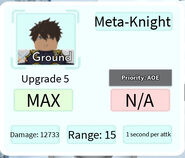