Roblox: All Star Tower Defense Wiki
Register
Don't have an account?
Sign In
Advertisement
in: Support, 5-star characters, Units based on Attack on Titan characters

This unit is currently in the meta, which means they are the one of the best and most effective units in the game.

Onwin is a 5-star support tower based on Erwin Smith from the anime Attack on Titan. He increases the damage of units within his range with a manual ability (called Shinzou Wo Sasageyo) by a specific percentage, which is shown as Erwin's damage stat. This ability’s effect lasts 30 seconds and has a 60 second cooldown. Erwin does NOT directly attack troops and cannot be used on his own. Erwin is only obtainable from the Hero Summon and is not a part of any evolution.

⁣⁣⁣⁣click on any part of the information block

Shinzou Wo Sasageyo (which translates to give/offer your hearts) is an ability that allows Erwin to increase the damage stats of units in his range by a certain percentage.

Although Erwin does not see any increase in his maximal damage buff after a certain point, it is still beneficial to level him up and use damage orbs on him to reach the buff cap as fast as possible.

If you were to chain buff infinitely without ever messing up and without regard for how long it would take to reach, then you would have no use for having an Erwin that does anything more than 67 damage at max upgrade.

However, Erwin's damage plays a much greater importance when it is necessary for you to buff as soon as possible or without enough money to afford a chain. When playing with many people especially, Erwin buffs at an early round can serve to massively increase damage output and save others from having to upgrade their starter units. This is when having a level 175 Erwin with Fire Orb undoubtedly excels a level 80 Erwin with Bomb Orb. That being said, it is rarely necessary to go to such extremes and should realistically only occur in gamemodes with a finite wave count.

A hard cap of 200% damage is in place. Don't go overboard and waste any precious placements trying to get an insane buff!

Erwin cannot be sold. Considering the importance of this unit, you should be EXTREMELY careful before placing him.

The upgrade card images below are of a level 80 Erwin. 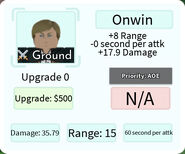 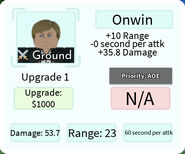 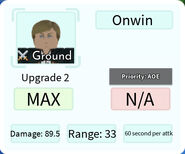