Veguko is a 6-star ground and AoE (Circle) type unit based on Vegito from the anime Dragon Ball Z and Dragon Ball Super. He is also a hybrid unit and a fusion unit like Kovegu. Similar to Kovegu, he requires any version of Koku and any version of Vegu to be placed (with the Left and Right God earring orbs). However, he does not take up any slots in your inventory, and instead will be automatically placed once both Koku and Vegu are placed. In order to obtain Veguko, you need to get the left and right God Earrings from the Orb Shop and equip the right earring to Vegu, and the left earring to Koku. Veguko is banned from PvP modes because if the enemy has God earrings on their Vegu or Koku, you would be able to steal your enemy's unit.

Veguko can be placed via God Earring Right Orb and Earring Left Orb on Koku and Vegu. Crafting requirements are as follows:

The sell price on Veguko’s deployment depends on which Koku or Vegu was placed last.

Troops sell for half their cost of deployment plus upgrades.

Huge tip: You can use another person's Vegu or Koku to place Veguko. However, that person must have the right earring equipped on Veguko (Or the left earring on Koku). Therefore, if you can get an alt that has Vegu along with the earring, then make the alt leave afterward, bringing the required units is not needed. You can also ask your partner to bring an alt. 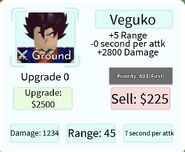 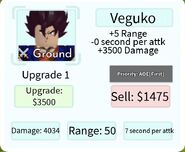 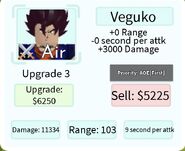 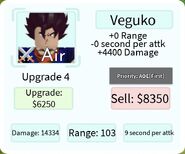 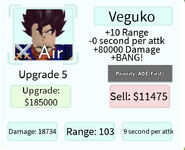 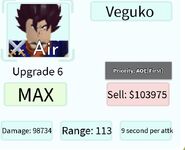